If you have read the fine print then you should know, despite Facebook being the epicentre between all free social media platforms – it still has rules and regulations that apply to all users.

Facebook is a highly effective and practical means of reaching out to potential clients, promote your business and create a network of traffic to which you can tap into. But, it still has its own laws and regulations in place to prevent unlimited spamming, unsolicited posts and messages that could otherwise hamper the experience of other users. You might want to contact Facebook if you are having trouble with managing your account.

When Facebook punishes an account (personal profile or business page) – they could either block your account or disable certain features temporarily, if any Facebook laws has been breached (such as, inappropriate posts/content, posing too often, giving too many likes, etc.) 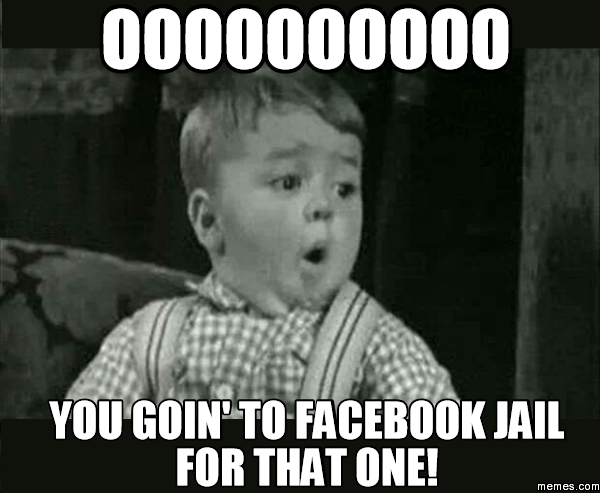 You can immediately notice the consequences of breaking any Facebook rules, like not being able to post anything for hours or days or weeks, depending on the severity of the ban.

The reason why most users fall trap to the Facebook jail policies is because they miss out reading the terms and conditions, comprehensively. They either lose interest while reading or avoid having a look at it entirely.

Facebook jail is Facebook’s way of keeping check on its users but it shouldn’t worry you too much though, as it can be easily be avoided by following these few simple tips.

The Facebook Jail County is on the prowl to see who is spamming Facebook groups with the same post/content repeatedly at the same time.

Sometimes, a rush of productivity or the fear of forgetting later or even losing the flow of posting could get us in to rush-posting in many different groups, simultaneously. This could lead to Facebook viewing your activity as ‘spamming’ and bar you from posting for several hours.

A very simple solution to this would be to wait and give gaps of 5 to 6 minutes in between post. This makes your activity look more organic in the eyes of the Facebook sheriff. You could also employ a smarter strategy to schedule multiple posts to get posted after a short gap, each time. This easily serves your purpose of posting without the corresponding repercussion.

Most community members and Facebook users would usually repost images, posts and links that are not their own, or has been suggested by Google. The issue with posting these free images is that they could be previously marked by Facebook as spam or has been reported several times. This makes it more practical to use your own posters and images that hasn’t been used earlier by other users. It is an assured method of not getting sent to Facebook Jail. Most pictures and posts you repost might have already been reported earlier so its best avoid this pitchfork in the road.

If you notice that Facebook is preventing you from sending Friend Requests, it could either mean that the people you are adding are not responding to your requests, which confuses Facebook as to why you wish to send them requests in the first place. Avoid being unwelcomed by strangers as Facebook recognises their disapproval of your profile and makes amends by barring you from adding more people repeatedly.

4. Avoid Sending Too Many Messages

The reality is that Facebook has no concrete policy as to how many messages you can send at a time or in a day. It could be that you were simply excited about the release of your new album, or wish to talk to people regarding this amazing trip you took and chose to inbox everyone on your friendliest. The irresponsiveness of the majority of users to your messages could lead Facebook into thinking you are spamming them. This could land your profile on the one way ticket to Facebook jail, so its best recommended to avoid sending too many messages in rapid-fire succession.

If you take a trip down your Facebook wall, you will notice what is common about your posting habits. Its best to remain informed about which habits you can avoid that could get you sent to Facebook Jail. Review your profile every once in a while to add an update to your biography and other information. Providing clear and concrete information in the Facebook ‘About’ section increases the chances of your profile receiving positive credibility from the users that follow you.

This authenticates your profile in the eyes of the Facebook County and separates the wheat from the chaff, or otherwise getting sent to Facebook Jail. This tip applies to all other activities as well, like – posting enormous links, posting your business details on someone else’s page, spamming the Facebook feed with multiple posts. The more you show Facebook how honest and ethical your profile is, the better your chances of remaining immune to the consequences.

33 Stylish Essentials Everyone Should Own in 2021 Are Temporarily Cheaper

How Important Cryptocurrency Will Be in Metaverse?

6 Ways to Protect Your Power Path